What is Hanukkah Anyway? 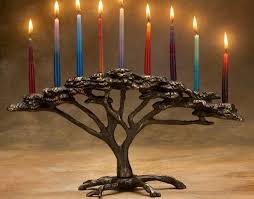 Canukkah is also called the Festival of Lights because of what actually happened during this time.

Around 300 BC Jerusalem with being ruled by the Egyptians. The Assyrian ruled by Aniacus, took over Jerusalem Aniacus wanted the Jewish people to become assimilated  into the Assyrian culture  so he outlawed Judaism, even went so far as to say the Jewish people could get married. But the wife had to First sleep with an Assyrian soldier before she could sleep with her husband. This s so that there will always be a question as to whether or not that child was Jewish.  this is the rot of if your mother s Jewish then so are you. Practicing Judaism was punishable by death.

In 168 BC Aniacuz defiled the Temple by doing two things. He sacrificed a pig on the Altar and he also set up the Temple to be a Temple for the god Zeus (the statue had Aniacus's face on it.)

Matthias who was the high priest at the time decided that this was not acceptable and he went to war against Aniacus and the Assyrians. The Warriors became known as The Maccabees because Matthias' his oldest son was Judas Maccabee. It took 3 years for The Maccabees to overcome the Assyrians but in 165 BC they were able to recapture Jerusalem.

When they went back into the Temple they discovered that the Assyrian had defiled all but one flask  of Holy oil. A flask of oil could only burn for one night. It took 8 days to consecrate more oil. The miracle happened in that the one flash burnt for eight days until more oil could be consecrated. During this feast children often play with dreidels. Dreidels were tools used during this time to secretly teach children about Judaism so that Judaism would not be lost during their time of captivity. The Assyrians were told that the dreidel was a type of gambling die therefore they were allowed to keep them.

Chanukkah is a celebration which will be celebrated forever and we as Christians need to understand why the Feast of Dedication is so important.  Ithank we need to teach it to our children because this is the roots of our Christian faith. I encourage you to tell this story to your children and to help them to understand the importance of the roots of our faith. The importance of this Festival of Lights which we will be celebrating forever in the Millennial Kingdom. I hope you now have a good understanding of the Feast of dedication and the importance of it as well. I also hope that you teach this to your children!

To learn more about the Feast of dedication click here.

Believe in parenting
Posted by B arbara Harvey at 7:54 AM