What Dad's Bring to Kids 6 and Younger! 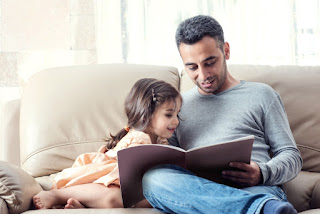 Erickson’s stages of Psycho-socal Development in early childhood include Trust vs. Mistrust, Autonomy vs. Shame, and Initiative vs. Guilt. Interestingly it is these three areas that fatherhood influences most.  The three areas are defined as follows:

Trust vs. Mistrust (Birth to 12 to 18 months)
The infant is in a new world and must learn to trust that his\her needs will be met. While in the womb everything was provided for them, in a safe warm environment. Now they are in a bigger and more frightening place. They need adults to meet these individual needs in a safe and secure place. If the infant learns to trust all is well. If not then he/she remain in this stage needing to learn trust
Autonomy vs. Shame /Doubt (18 mo. to three years)
This is the time when young children learn that they are individuals and concentrate on learning about themselves and what they can do. However, they are depending on adults in their lives to approve of their growth. When they are allowed to achieve, on their own, they develop a sense of self pride and an "I can do" spirit. When they are not allowed this chance to achieve on their own they feel doubt about themselves, and shame because of it.
Initiative vs. Guilt (3 to 6 years)
This is the age that children now begin to develop their own personalities. They have discovered what they can do, and they want to do it for themselves. Many times they will challenge adult authority in order to have the opportunity to do it themselves. This will cause them to have guilty feelings.
On LiveScience.com in an article “The Science of Fatherhood: Why Dad’s matter” the author Stephanie Pappas sites hormonal studies which show the increased levels of oxycotin and the decreased levels of testoterone help men to prepare for fatherhood. Oxytocin is the hormone nicknamed the “love-hormone” that give people the ‘feeling of being in love”. Studies also show that the more a father holds and interacts with their children the longer and stronger the effects on Dad. Dads are said to spend hours holding and gazing at their babies.  It is this close physical interaction that supports a child's ability to trust.  According to Ainsworth and Bowlby it is this contact that supports bonding.

Another article on the website zerotothree.com “How Fathers and Children Affect Each Other’s Development” speaks of Dad’s being present at bith to be better at describing an infant modd and temperment with richer details up to 3 to 6 months later. This article also talks about a study done on children whose fathers were the primary caregivers over ten years following dad’s and their children  from three months to ten years. This study showed that children when given the Yale Provence-Gesell Developmental Schedules showed no intellectual or emotional trouble,  fathers stimulated emotional attachment, children showed robust emotional flexibility, and also showed exceptional ability to handle the stress and and strain of daily life.  Dad’s tended to wait longer for children to attempt to do things for themselves and were more likely to give assistance and not rescue the child. These are the building blocks for developing autonomy and initiative. Though these conclusions came about with Dad’s as primary caregivers one might als0 conclude that Dad’s interaction with children prepare them to engage in daily life in a trusting, autonomous way that sparks initiative. One article I read even stated that Dad’s rarely pick up their children the same way twice. Children’s eyes open wide and heart rate speeds up. It was exactly the opposites for Moms.

What these articles show me is information on fatherhood I thought worthy of sharing. Fathers are very important in the life and care of young children We as practitioners need to not only explore these studies and articles we need to let the everyday parent know the true effect of Dad’s interactions and relationships with kids.

Want more? ptanda.org
Posted by B arbara Harvey at 8:30 PM