Did you notice the Superbowl Dad's? 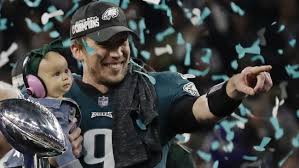 First of all let me say congratulation to the Philadelphia Eagles for the win of the 52nd Superbowl against the New England Patriots. The game was hard fought and won at the last minute. They played hard. The news regarding this team has spoken of the close knit brotherhood among the Eagles players. It speaks of their faith in God and in each other. One report I read said the closeness and camaraderie among is throup of men is unusual. I think it worth noting that not one Eagles player took a knee during the season and they are also known to get involved in their community to make strong differences.

One thing of not I noticed last night is how many of the Eagles players were carrying around their kids last night. The picture above is only one shot. I say at least five players carrying their kids around with them as they were talking and celebrating their win. This says a lot to me about the kind of men we are talking about. Family is important to thuis team. These men not only care about each other they apparently encourage each other to be good husbands and fathers as well.

Back in the 80s abd 90s there was an organization called Promise Keepers it was a ministry for men it primarily worked to keep men accountable to one another as they lived their lives as Christians, husbands, and fathers. Watching they way these players interacted amongst each other last night made me think of the brotherhood I witness among my male promis Keeper friends back in the day. While I congratulate the Eagles on being The Greatest Show on Turf, I also can not help but also congratulate them on being men who love God and seem to challenge one another on to love and good works.
Posted by B arbara Harvey at 6:46 AM