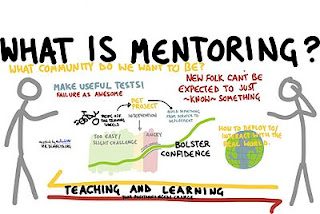 Last week we discussed making a shift in your parent-child relationship with the teen in your life. We talked about being an influence rather than primarily a teacher. A mentor still teaches, however they also coach, counsel, negotiate, and communicate. The shift takes place as we put more responsibility on our children to begin making their own decisions. We are talking age appropriate decisions here. But, we will get into that later. Right now I want to concentrate on the mentor role.


Teaching-here teaching changes tremendously.  When a teen was a child teaching was all about telling them exactly what to do, when, how and not necessarily why. However, teens need to know why some things are they way they are.  Parents need to teach teens what they will need to stand on their own in life.  This includes self-care, finances, banking, paying bills, taxes, a work ethic, and other things children will need to understand how to get along well.  The teen years are where teens begin to understand the pressures and responsibilities of the adult world.  Parents teach them and then back-off and allow them to develop their own way

Coaching- This is the next step after teaching children the things they need to know and letting them move on to do it their own way. A parent then becomes a coach.  Help teens by giving them suggestions and even preferences for how to deal with issues, problems, or planning.  Teens are given some rope to work with parents decide how much rope and can help teens to develop by letting out and pulling back on the rope as needed.

Counseling- Coaching and counseling are very close however they are different in that coaching is about what to do. Counseling is about how you feel or are reacting to a situation. Parents need to keep calm about whatever situation a teen is facing and help them to fight their own battles and work through their own issues.

Counseling is the time to help teens work these things through and give them the tools they need to work things out. Parents can be supportive and helpful, but they should refrain as much as possible from taking sides or jumping into the fray.

Negotiating- Parents should set rules on issues that are non-negotiable.  However, the things that are not nailed down should be open for negotiation.  For instance, if week-end curfew is 11:00, but you really don’t care if they stay out a little later on Friday or Saturday night, that could be occasionally negotiated.  Trust is a large area in negotiation.  Parents and teens need to be open and honest about what they want and need.  Negotiation is not arguing.  Parents should never argue with a teen.  Parents who remain calm and resolute will gain a teens respect.  Just let your no be no and stick to it.

Negotiation is a calm and focused discussion based on mutual respect and firm reasoning not emotional outbursts.  If a teen begins to argue a parent should end negotiations until the teen is calm.  Understand that emotional outbursts are part of a teenager’s make-up, however, that does not mean you have to put up with them.  Make sure you point out the drama and let them know negotiations can re-start when they are calm.  You can also shut down negotiations period if they continue to argue.  If you shut down negotiation don’t back down maintain a consistent and firm resolve.  When you say something mean it.

Parents can make the mistake of putting their own feelings before that of their children forgetting that teens are indeed still kids.  They need all of the care and support they can get.  Listening is the best way to do that.  Keep in mind that teens are not likely to communicate with an audience.  In addition, teens are not likely to sit down and have an eye to eye discussion.  Parents can help by setting up an activity to do together.  Whether it is making dinner or golfing teens are more likely to talk if they are given opportunities to do so without direct eye contact or worrying that someone might overhear.

Both eye contact and ease dropping can be intimidating for someone especially when you care what the other person thinks of you.  Teens really do care what their parents think.  Even if they say they hate you they still care what parents think.  So, parent can show their best support by caring what their teens think.  Simply listening with an open mind can get teens to know you care.

Take the next few weeks to journal about how you fee and think of your teen entering into the adult world. What things do you want them to know and how can you get it across to them without beating them over the head with it. In two weeks I will post on how to begin the conversation.