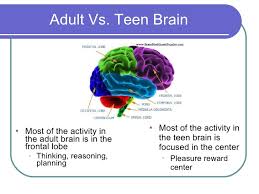 When we look at the average 13-15 year old today it is often hard to remember they are not as old as they look. When I was 13, I looked like a grow woman if you looked at me from the neck  down. I have always been admired by older men. However, just because teens look so mature their brains are far from it.

Looking back I can see how I thought I was so mature, but I was always getting in trouble for spouting off at the mouth. I wish my Mom had known about brain development I may have not been grounded near as much. She might have cut me some slack had she known, I was not yet capable of thinking about what I was thinking.

The teen brain is also different in that it has literally thousands of connections called neuro-connectors. As a matter of fact it is these connectors which prevent the teen brain from being able to use the frontal lobe. As we spoke about last week the pituitary plays a large part in physical development. Part of what this gland does is to cue the brain to start changing a child's brain into a more mature brain. Thus, the brain begins to develop these neuro-connectors in order to begin the restructuring process. So, much of what is going on in puberty. It turns out the process is a lot more complicated than most of us thought. This week your exercise is to read two articles about the brain development of teens.

This week has a lot of science and details. Write about the things you remember reading. Check in through observation and some discussion with your teen about their mental and emotional healthy. Writ about your discussions and think them through. Those discussions will tell you about how your teen is really doing.

If you find your teen is struggling this article from the National Institute of Mental Health may provide some support. Understanding brain development is a huge part of helping you child navigate the teen years. Taking the time to both read and think about it will serve you well.Take the time to do this. It will bo better for you both.